I like being able to click on the clock and see a calendar and list of events for the day selected.  I have both Google and Outlook.com accounts that I use for different purposes and whichever calendars I select in the Calendar app will show up in the agenda.
I use this often during work because I join video meetings from the host system (not work's virtual desktop).  So I duplicate meetings from my work calendar to my Outlook.com calendar including the Zoom or GoToMeeting links.  Having it listed in the Agenda, alongside my personal agenda items, gives me quick and easy access to the link. 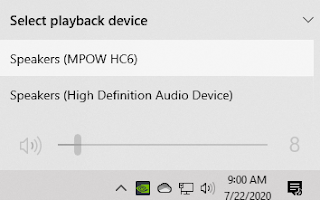 For video meetings I have a headset and at the same time I have speakers plugged in for ambient sounds and music.  The ouptput selector when you click on the speaker volume control makes it so quick and easy to switch from one to the other without unplugging or having to go into a separate window.
I am grateful, too, that it remembers the setting for the volume of each output because my speakers are soft, but my headphones are loud.  I don't want to blow out my ears!

Some people like it, some people hate it.  I like it .  The ability to pin websites as if they were applications to make them open in their own window. Especially websites that do not need to open new tabs or navigate away (calendar, my web comics, google docs, etc.).
It gives me quick and easy access to these sites and not have to worry about which browser window it opens in, or accidentally closing it while closing the window while on another tab.
Chrome has the advantage of allowing you to choose whether it opens as its own app window, or just as a new tab on any existing browser windows.   This is cool, and I like the options but Edge does it easy, the browser is quick to open up.  It shows up so I can easily pin it to the Start menu. 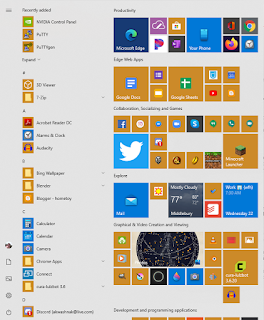 This has been a controversial part of Windows since before it came out.  When I had my first phone, a Lumina 650 Windows 10 phone, I liked the live tiles. Their shapes, groupings and colors helped me know where the icon I was looking for was at a glance.  I guess I am a visual person.
In my start menu I do a couple of things to make it useful for me.
I group them somewhat.  Like all of my work-related apps (web apps as well as local apps) are in one group, while multimedia (pictures and video) are in another, web apps are together, etc.

Using the Windows key and an arrow, being able to easily "snap" it to one side or the other, and then having another app snapped to the other side, is a very handy and often used feature.
This is great when I am doing web development (browser/code) or research (browser/note taking app) where I can see both at the same time.  Even more helpful with the larger monitor (27").
Part of the benefit is being able to resize both apps at the same time. By grabbing the line between the two apps and moving it to one side or the other, it resizes both apps accordingly (one shrinking and one growing).

File storage apps (OneDrive, Google Drive, Dropbox, etc.) will synchronize your files locally to their cloud. OneDrive does one better.
I don't have to have the files taking up space on my local hard drive if I don't need it. However I still see and can interact with the files through the file manager as if it were.
When I want to open the file, I double-click on it like any other file.  OneDrive then downloads it and opens it.  Yes it takes a few moments or longer, depending on the size of the file, waiting for it to download first but comparing the handful of files downloaded to the gigabytes of disk space saved is worth it.
So if I go between multiple machines, I don't have to wait for everything to be synchronized before opening any file, or if I had a portable machine like Surface Go, I don't have to fill up the disk space with files I'm not going to open on the smaller machine.
I think this is a killer feature of OneDrive.

Edit: I forgot about WSL!
WSL is Windows Subsystem [of] Linux which is really cool way of running Linux in Windows. It's command-line only, which suits me fine, and it scratches my Linux itch.
I use it for running a webserver and do web development which is simple to set up and run. Since any deployment will be on a LAMP (Linux Apache MariaDb/MySQL and PHP) it works out perfectly.
The feature I really love that makes it easy to develop with WSL is that I can mount the /var/www/ directory to a folder in Windows. This way I can manipulate the files in Windows Explorer and use development tools easily.
I am also glad there is a WSL extension for Visual Studio Code that makes it easy to connect to WSL for development.  This will come in handy when I start making my own Modules and Themes.
This suits me fine because I use WSL for running Linux servers for developing and exploring web development. It's great because if I publish the website or code it will be on a Linux server anyway.
It is easy to set up, get into a work with WSL and in addition to letting me get my Linux fix, I map a drive to somewhere on my Windows computer so I can get the files

It's no doubt that most peripherals will work with Windows.  Unless you use another system where you have to question "will it work", this is easily taken for granted.
Not only do most peripherals work, plugging them into a USB hub or the CPU the new device is usually auto-detected and the system goes out and gets drivers for it automatically.  I assume they are generic drivers, but enough to tell the device is recognized.

So Windows 10 has some features that I like, and use regularly.  Some of these features are available in Linux, and this doesn't mean that there are not parts that I do NOT like.  But if I were making a 'perfect' computer I would want these features to be included.
What are some of your favorite features of Windows 10. Only positives (things you like), negatives will come later.
Posted by Drew at 6:00 PM No comments:

Email ThisBlogThis!Share to TwitterShare to FacebookShare to Pinterest
Labels: OneDrive, Windows 10
Older Posts Home
Subscribe to: Posts (Atom)
These are just some random thoughts and ideas on a variety of subjects as they come to me. They may not make much sense or follow any particular pattern or thought process.
I do not vouch for anything written and is not necessarily reflective of anything other than my thoughts at that particular moment (subject to change without notice).
Comments are only encouraged for thoughtful conversation and everything else will be deleted.

Drew
I am somebody who enjoys technology and the challenge of making anything that comes my way be useful in some way. Also the family System Admin for every electronic device in the house (but I am slowly losing that position). Because I can usually make something work for me, I end up receiving a lot of older hardware. Someday I hope to get a computer that is less than 7 years old for myself, but beggers can't be choosers. On the plus-side I haven't had to purchase a new computer for myself since 2000!